We thought we’d introduce you to our kitties before you come and meet them in person in our cafe! Each kitty has a completely different personality, but all of them are so friendly and loveable!

Some are playful and energetic, others are sleepy and cuddly- there’s a cat for everyone here at Paws!

Tweenie and her brother, Patch, used to live with an elderly lady, and came to the rescue centre after she sadly passed away.
Tweenie is a really sweet, loving, girl; she enjoys playing and loves attention. She is most recognisable by her little black nose and noticeable fork in her left ear. She loves a good head scratch and if you get it just right she will smile up at you!
MINNIE | Girl |

Poor Minnie was very overlooked in the Rescue Centre. Being a black cat for a start didn't help, then to add to her problems she had several facial abscesses, which led to surgery and several teeth extractions. She is now fully recovered and enjoying her fur-ever home.
She lived in a bungalow all her life and turns her nose up at the stairs so she tends to be quite elusive but she is very affectionate and loves a lot of attention.

Jasper (ginger)  and Belle (black and white) were rescued together from Romania where they spent their whole lives in a cage.

They are finally free to roam around, but it left Jasper a little timid at first. He has grown in confidence every day and now you wouldn’t even know he was the same boy. He loves the attention and is so playful enjoying his new space.

Belle on the other hand was very friendly from the start she adores attention and loves climbing on people, but only on her terms! She likes sit on your chest and shoulders and is very playful, she is always very proud once she has caught her prey!

Pride and Princess were taken to the rescue centre out of love by an ex-soldier who was sadly unable to keep them due to his situation. Because they were indoor cats who were so loved they were perfect for us here.

Pride is confident, friendly and a bit of a troublemaker. He sits up high until he decides he wants some attention, whereas Princess is a little shyer. She is however very affectionate when she wants to be and as you can see, they are the best of friends!

What can I say about Frank?

Well he likes to think he rules the roost, but maybe that's because he can't hear anyone else!

Frank is deaf, but that does not stop him being our biggest troublemaker he somehow manages to get himself into and onto everything. He is a lovely, if not cheeky boy who absolutely adores a fuss.

Bluebell (Grey) & Blossom (White) are the newest editions to our loving family.

These two beautiful kittens are currently only 3 months old as of August, they were born to a very young mom who couldn’t safely care for them as she had nine kittens. For their own safety they were taken in by a rescue centre and later taken in by us once they were old enough.

They have settled very quickly and thrive in this environment as they get all the attention and play they want.

Hiccup (Tabby) and Toothless (Black) are the only cats here that did not come from Romney House.

We rescued these two gorgeous cats from a farm when they were just 4 months old after they were found with their litter siblings. The people on the farm couldn’t afford to have them all neutered and they were fast approaching the age where they would all start breeding themselves  which would have caused many more issues for these kittens. They had been living feral so it was very hard work catching them all.

The kittens are now all safe and sound, neutered, chipped and vaccinated and it has been heart-warming to see their progress.


HARRY | Boy & HERMIONE, LILY, and LUNA| All girls
These four had such a bumpy start starting out as feral and living a rough life on the streets, they are taking a long time to start trusting people. Now having found their forever home they are starting to settle. But it is a long slow process; the four of them are very playful and keen on a treat or two.

The process of their rehabilitation is slow but positive. They are learning from all their older cat friends and we are starting to gain their trust.
Here at Paws we have so much time to spend with them and we are loving getting to know them and see their characters build

Sara is the Queen of sass! She has such a little attitude and has come so far since we've rescued her!
Poor Sara was rather neglected by her previous family. They knew nothing about cats and thought that they fed themselves, leaving Sara to scavenge and steal food to survive!
Before coming to Paws she was tiny; she'd never tasted cat food or even eaten from a bowl! She has slowly learned to be more cat, and has put weight on well too! But watch out for your milk jugs, she is still prone to trying to get a taste every now and then!
She is a lovely girl and it is amazing what she can achieve with a little patience and a lot of love and attention!

Harvey came to Paws after being a stray, rescued from the streets by a lovely lady following an accident he was involved in. Sadly she could not afford all the vet bills for the treatment he needed.
When Harvey arrived, he was timid and hid a lot. He had come so far and made himself very at home in the cafe, usually on the comfiest sofa and blanket.
He unfortunately passed away at the beginning of the lockdown; he began limping and discovered cancer in his leg. We tried amputating, and everything else we could to save him, but we were left with no other option than to put him to sleep.

Sadly our beloved Ginny has passed away due to a long term illness, however she will always be remembered as the tough little cat she was.

In March 2019 Ginny was expected to roughly live for only two more weeks, however she fought against the cancerous tumour and lived for another six months with us before the tumour eventually took too much of a toll on her and we sadly had to make the decision to put her to sleep.

Although it broke all of our hearts we knew it was in her best interest.

Our gorgeous girl will never be forgotten and will always remain in our hearts.

Patch is the brother of Tweeny and came from the same elderly lady.

He thrived for the first year in the cafe environment however as he is an older cat he grew rather tiresome, and after a while we understood that the cafe was no longer benefitting him.

We made the decision to take him out of the cafe, and he now lives with the owner, Elaine, where he lazes happily around the house and enjoys the company of her other cats- and fewer people!


And that's all of us! We hope you enjoy our blogposts, feel free to input suggestions of future blogposts to us!

Hope you’re all safe and well, 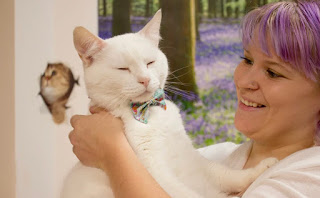